You don’t find a lot of places like Mukan anymore. Where you can take in the full spread of the solar system from the side of a bioluminescent lagoon, unspoiled by the aura of a frantic nearby interstate. Where the strains of a gentle surf mingling with the sonata of nesting songbirds is never shattered by the sound of leaf blowers or chainsaws. A place of blissful isolation, where you can live out your Robinson Crusoe fantasies between white sand beaches and a sacred Mayan biosphere brimming with fish and the occasional crocodile or manatee.

We had, in fact, been cautioned that Mukan may not be what we were looking for. A city-based couple with a baby daughter attached at the hip, we were notified more than once that, in fact, there wasn’t a whole lot more than a beautiful beach. In other words, exactly what we were looking for. And significantly more. Mukan is certainly as kicked-back as a resort can be, but in the kind of smartly-tailored, service-intensive way that would make you comfortable sending your most famous or used-to-being-pampered friend.

After rambling through the increasingly and increasingly annoying boho chic corridor of Tulum, which, we swear, is starting to look a little indistinguishable from Abbot Kinney, we boarded a motorboat to speed and twist roughly 45 minutes through the captivating, unspoiled splendors of the Sian Ka’an, a biosphere reserve and UNESCO site. Greeted at the docks with a cold and greatly-appreciated drink, our journey and any last effort on our part had come to a close.

Led through an open lobby that looks like it could be Richard Branson’s vacation house living room, we didn’t even need to go through the formalities of checking in before we were escorted to our comfortable, modern corner room suspended over the white sand, which never even needed to be locked in this tranquil refuge of just five rooms and four ocean suites. Though we had intrepid options like spear-fishing, exploring a lush reef within swimming distance, or excursions to Tulum’s ruins, we opted to spend our days with considerably less ambition. Our routine went roughly as follows: Fresh coffee in bed followed by a walk on the sand. Breakfast might be quesadillas stuffed with local herb chaya with one of the most complex salsa habanero we’ve ever tasted, followed by some combinations of jumping in the ocean and back into hammocks and oversized canopy beds on the sand, rinse and repeat. We wouldn’t have been able to do this without the incredible service of the small, gracious staff, attending to our every need and desire. When refreshment was needed, an on-site coconut concierge was quick to select choice cocos from the trees overhead, preparing the water into a carafe to be placed on your hammock-side tree stump, the sweet meat served ceviche-style in an accompanying bowl. The staff, notably two hard-working young men named Willie and Ali, and a spa and yoga director named Nicole, felt like friends shortly into the stay. Explanations of Mayan and Central and South American traditions and tales of enviable travels captivated us during great talks. This feeling was often compounded by an optional sunset cocktail, just a short saunter through a tiny and well-lit jungle, on the resort’s stunning lagoon side. There we’d enjoy short swims or easy-going kayak rides towards the setting sun followed by a fine sipping tequila or glass of Baja red, the sky above blazing in divine reds and oranges.

Meals were always a revelation at Mukan, the menus a nightly surprise to look forward to with relish. Lunches were often comprised of simple, grilled shrimp tacos with an addictive mojo al ajo, fresh ceviche and bowls of guacamole big enough to satisfy the biggest avocado advocate. Dinners were similarly simple, often starring local catches and traditional Yucatan fare imbued with complimentary alta cocina touches, including a perfect version of regional favorite sopa de lima, but with a deft touch that betrayed the presence of a master in the kitchen. Meals were thoughtfully located, with guest tables set in different locations from one another each night, allowing privacy and intimacy among settings like a rooftop under the plentiful stars or a seafood dinner directly on the sand. 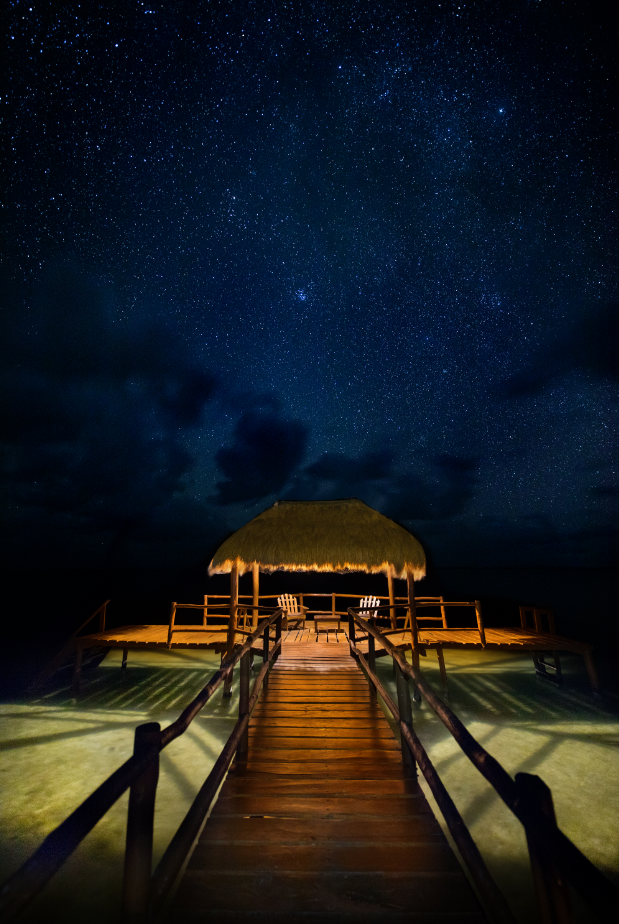 Following dinner, with Cancun and a zillion Riviera Maya party spots safely miles from mind and sight, a short walk to the sand or back to the lagoon to observe the waters that glow at night when disturbed were equally miraculous. With five-star hospitality, excellent and locally-rooted cuisine and stylish accommodations in an ultra-relaxed setting wedged between the Caribbean and a hallowed sanctuary, Mukan is the kind of place you know is going to hurt to leave once when your boat pushes back from the dock for return to the real world.

But it’s the kind of place that weaves beautiful memories you return to again and again once you’re back in the grind, a place of rare magic that you’ll be happy you discovered can actually be real in this day and age. One you’ll fall asleep while dreaming of returning to, in those times when it’s hard to believe that a place built on peace, quiet, natural beauty and utter relaxation still exist. Mukan, http://mukan.com/.